Our gourmet restaurant is particularly well renowned on the island of Raiatea, offering refined dishes in an idyllic setting.
Sober, elegant and streamlined, the plates are as if magnified by the subdued lighting and the fragrances emanating from the garden. Seated facing the lagoon, not far from the pool, all you have to do is let yourself be carried away by this symphony of aromas and harmony of colours.
The ambition of the chef, Franck Bezy, is simple: to exalt the flavours by composing with local products of the highest quality, to enhance Polynesian authenticity with international influences. Grouper fish, mahi mahi, red tuna, lobsters, parrots, jacks, marlins and spangled emperors will bring an exotic tonality to your dish while you will find more tenderness in the red meats from New Zealand.
Not far away, the bar prides itself on promoting local producers by offering you fruity cocktails made from rum distilled on the island of Taha’a. Nestled in traditional colonial armchairs, enjoy the Polynesian sounds in a lounge friendly and refined atmosphere.

Respecting the 100% homemade rule, the breakfast table is one of the signatures of Raiatea Lodge.
The pastries that fill the air with their fragrance as soon as they come out of the oven, the bread that crunches in your mouth, topped with coconut, mango, pineapple or papaya jams… Let yourself be tempted by this appetizing plate of fruit, straight from the Fa’apu of Raiatea, or by a tasty fresh tropical juice. Try the homemade yoghurt, worked with Alain Abel’s vanilla, or the coconut-based cakes and marbles.
A healthy space with savoury sweets is also available to you. All you need to do is to watch the sun rays successively reach the coral reef and sprinkle this magnificent spectacle with a little Raiatea honey! 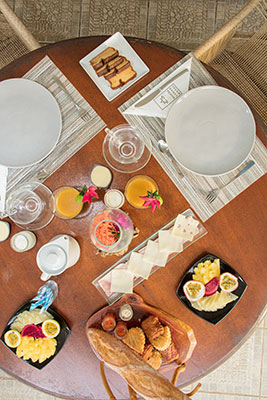 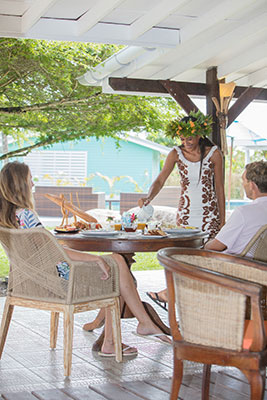 In addition to the restaurant’s menu, we offer a snacking menu, which combines simplicity and gourmet delicacies. The Mahi Mahi Burger is served alongside red tuna tartar with herbs and raw fish with fresh coconut milk.
You may prefer our grilled beef or fish from the lagoon a la Plancha?
If you are looking for a more refined dish, opt for the evening menu. 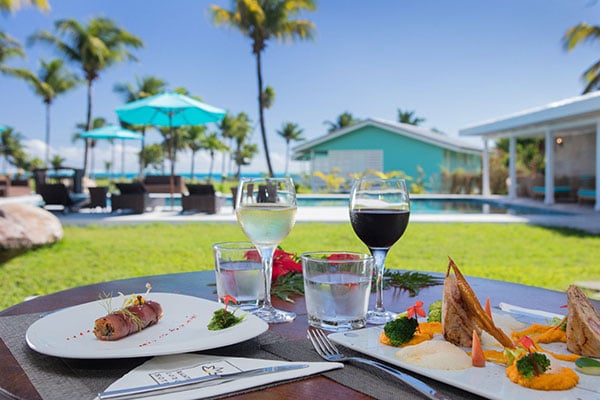 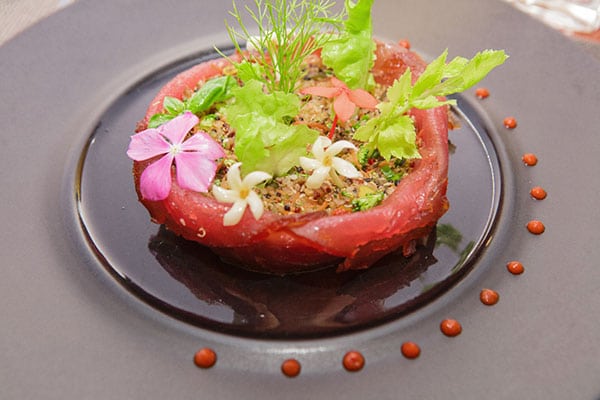 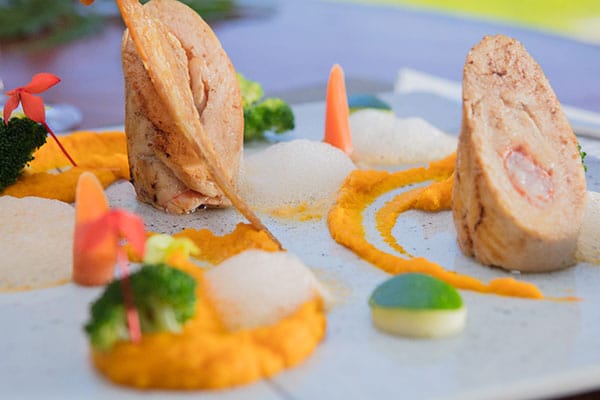 As night falls on Raiatea, the temperature drops slightly while the atmosphere warms up, this is probably the best time of the day. As half-board is included in your stay, the chef dedicates his skills to the lodge’s guests, although his menu also attracts some guests from out of town.
There, in the middle of the coconut grove, the products are worked simply to keep their original taste and texture, the local flavours are present but subtle. The fish is necessarily the most important part of the menu. Lagoon fish, pelagic, our suggestions of the week will allow you to taste seasonal pleasures such as lobster, pahua (clam) or vana (sea urchin).
As for red meat lovers, they will be able to turn to a beef cheek braised with amber Hinano beer or a lamb parmentier confit with black olives and its sweet potato mousseline… 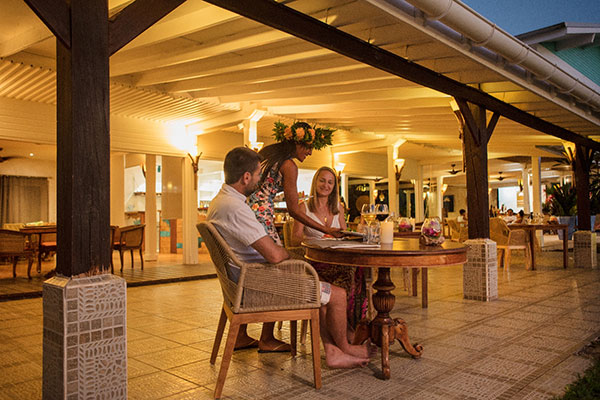 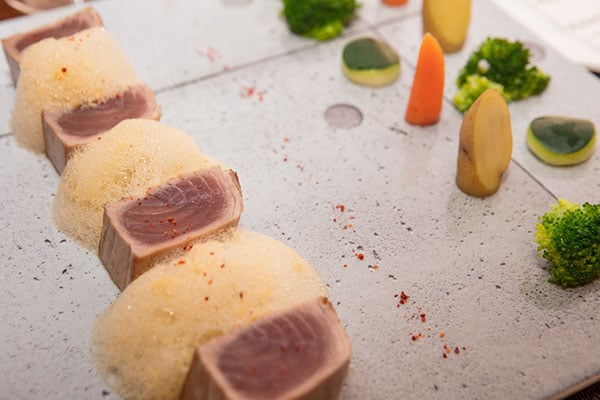 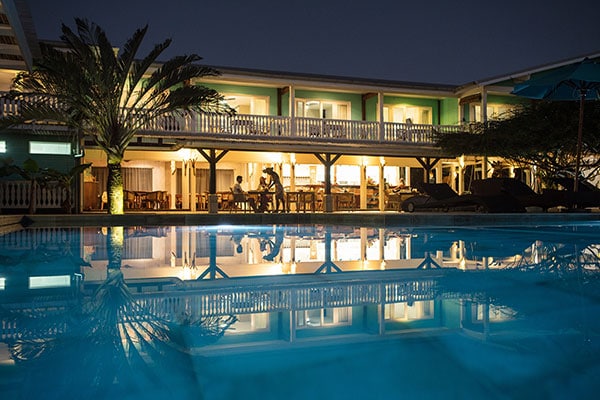 It is in his native Provence that our chef, Franck Bezy, took his first steps into gastronomic cuisine and pastry making, alongside Alain Assaut, in St Remy de Provence. After having expanded his knowledge working in the Côte d’Azur, his adventure began beside Jacques Chibois as a kitchen assistant at the Bastide St Antoine de Grasse (2* Michelin, Relais et Châteaux).

Spotted-out by Emanuel Ruz in 2000, he leaves Grasse for the small village of Plascassier and assists the chef in his new restaurant Lou Fassum. Together, they were awarded one star in the Michelin guide in their first year of co-operation. After 2 years as sous-chef, Franck joined Serge Gouloumes’ brigade in Mougins at Mas Candille (1* Michelin, Relais et Châteaux), and trained in “haute couture” pastry with Julien Maslanka.

At the age of 25, he obtained his 1st position as Chef in Polynesia at the Taha’a Island Resort and Spa, then the only Relais et Châteaux on the territory. He ran two restaurants there, one traditional, the other one gourmet, and was introduced to local flavours.
In 2017, he accepted the challenge to take over the hotel La Pirogue Api, located on a motu, with his partner.

Nowdays the chef invites you to indulge in a sweet mix of French, international and Polynesian flavours at the Raiatea Lodge Hotel. 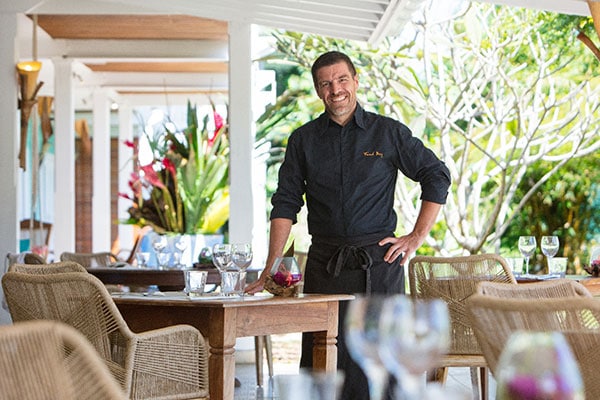 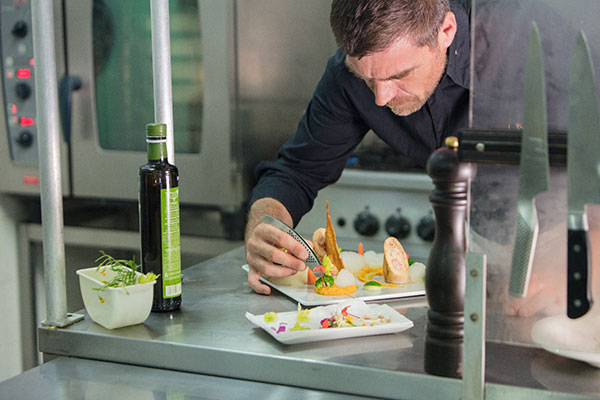 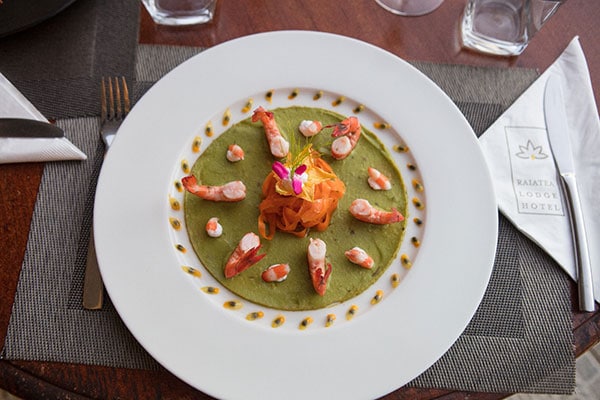